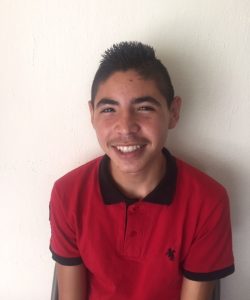 Geovany is an active boy with lots of friends. He gets along well with everyone at home and very well at school. He is the youngest boy of the family. He enjoys playing soccer. He is still seeing what subjects he likes to most since he is just in first grade. He loves to sit with his sister and hear her read to him

His stepfather´s name is Juan and has an elementary school education. He works as a waiter.
His mother, Ana, works as a domestic but doesn’t have a job now.

The family owns their own house, which has one room, a bath and three beds.